Our College has established Institution Innovation Council as per the norms of Innovation Cell, Ministry of HRD, Govt. of India during IIC Calendar year 2019-20 . 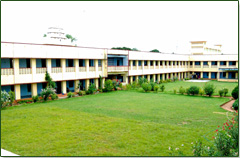 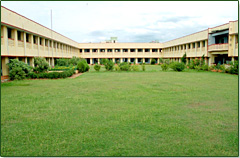 Sri Sarada College was started in 1961 as an affiliated college to the University of Madras with two sections of Pre-University class (with eighty students). Later, it has increased in strength to become a First Grade college with twelve under-graduate courses, seven post-graduate courses, nine M.Phil. programmes, seven Ph.D. programmes and two Self - Financing P.G. Courses (M.Sc. Computer Science and M.Com.). Autonomous status was conferred by the University Grants Commission in the year 1988-1989 under the able guidance of Yatiswari Saradapriya Amba. The College was accredited with Four stars in 2002, re-accredited with ‘B’ Grade (2.94 on a 4 point scale ) in 2008 and re-accredited with ‘A’ Grade in 2014 by NAAC. The foundation stone of Sri Sarada College for women was laid by Former President of India, Dr. Sarvapalli Radhakrishnan on 06.01.1963. Former Prime Minister of India, Sri Rajiv Gandhi opened the Sister Nivedita Auditorium on 01.05.1987 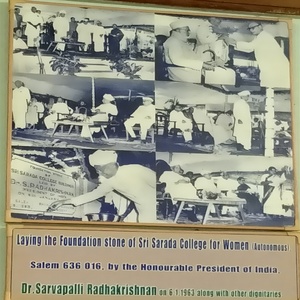 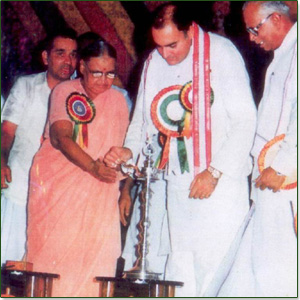 The College offers upto-date career oriented education which is integrated with our ancient culture and tradition. To meet the challenges of the ever-changing modern scenario, the academic needs of the young students are closely analyzed and the curriculum is periodically redesigned in a way to develop the scientific temper and to enkindle the spirit of creativity in the students' minds. In almost all disciplines, priority is given to relate curriculum to the local needs. Extensive efforts are taken to concretize the aims and goals of the college through curricular, co-curricular and extension activities.

Sri Sarada College is located at Fairlands, Salem - 16. It is 2 km from the new bus stand and 4 km from the old bus stand as well as from the Salem railway junction.

The aim of the college is to offer modern and career oriented education in the background of our ancient culture and tradition, based on the ideals of Sri Ramakrishna Paramahamsa , Holy Mother Sri Sarada Devi and Swami Vivekananda.

Character building is the hallmark of true education which is the manifestation of perfection already in man. Development of right character comes from a congenial divine atmosphere. Both in the college and in the hostel, the day's activities commence with communal prayer. Character building centers round regular counselling classes where a workbook on moral instruction is used for interaction from the students on human relationships and character building qualities. There is a special Grievance Redressal Cell with senior faculty members to provide periodic guidance to students. Even at the highest collegiate level , we believe in the system of a Faculty Advisor for each class who acts as a mentor to the students. All these provide a congenial atmosphere for character building.

While character and culture are subjective , curriculum is the instrument to achieve both . Since Sri Sarada College for Women became an autonomous college, the curriculum has been framed with a view to have a happy blend of character and culture. Tamil , Sanskrit and Hindi are offered as first language. Medium of instruction is English. Eight faculties in Science , four in Arts and Language besides Commerce have given a wide network of choice in curriculum.